What is Nasopharyngeal Carcinoma (NPC)?

Nasopharyngeal carcinoma (NPC) is a type of head and neck cancer which is also known as ‘Nose Cancer’. The tumour is located at the nasopharynx, the upper part of the throat behind the nose and the back of the nasal passages. The nasopharynx serves as a passageway for air traveling from the nose to the throat and then on to the lung.

NPC starts from epithelial cells that line the nasopharynx. According to World Health Organisation (WHO), NPC is classified into:

Non-keratinizing NPCs are also referred as lymphoepithelioma because there are many white blood cells (called lymphocytes) exist among the cancer cells. This feature has attracted researchers to study the environment around NPC tumours (tumour microenvironment) that may help to develop new treatments.

NPC is a common disease in Malaysia 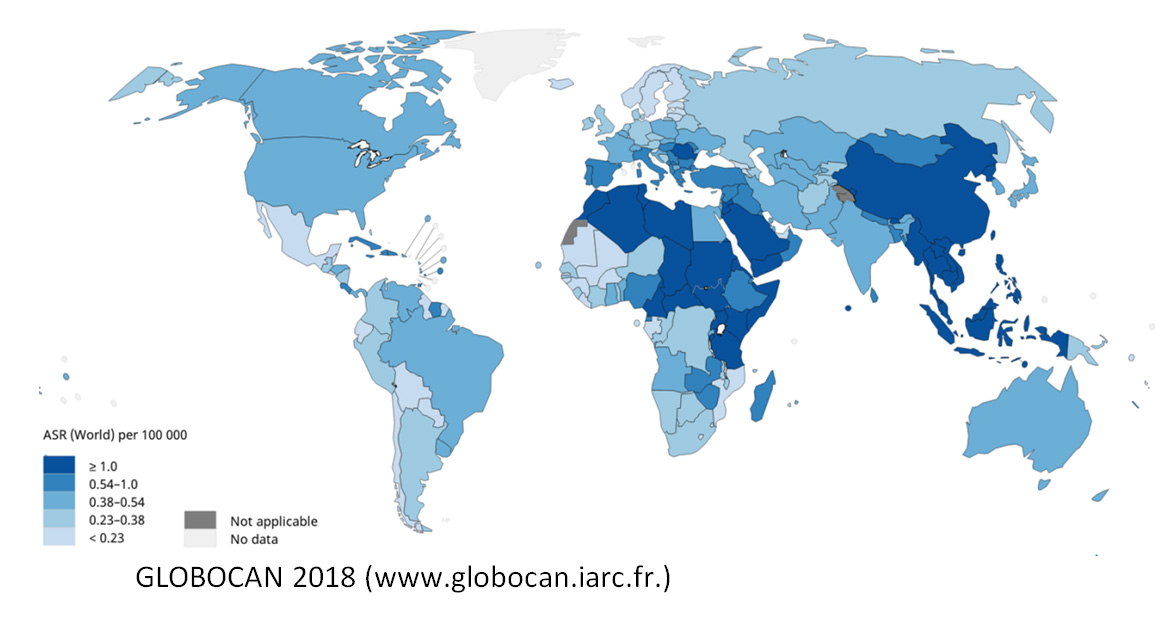 Globally, NPC is quite rare, with approximately 129,000 new cases reported in 2018 and attributed about 0.7% of all cancers. It is the 23rd most common cancer worldwide (GLOBOCAN 2018). In North America and Europe, the incidence rate is reported as less than 1 case per 100,000 populations. NPC is much more common in certain parts of the world with more than 80% of NPC cases are from Asia (endemic areas), particularly Southern China and Southeast Asia, including Malaysia. In endemic areas, the annual age-standardized rate of NPC can reach up to 2.7 - 12.7 per 100,000 populations in men and 1.2 - 6.9 per 100,000 populations in women (GLOBOCAN 2018). NPC can also be found in Middle East, North Africa and among Inuits of Alaska and Canada.

In Malaysia, NPC is the fifth most common cancer overall and third leading cancer in men (Malaysia National Cancer Registry Report 2007-2011). Among different ethnicity, NPC is the most common in Chinese and indigenous populations in East Malaysia (particularly Bidayuh), followed by Malay and it is rare in Indian. Globally, the incidence rate of NPC in Malaysian Chinese ranks the third after China and Singapore Chinese (Malaysia National Cancer Registry Report 2007-2011). 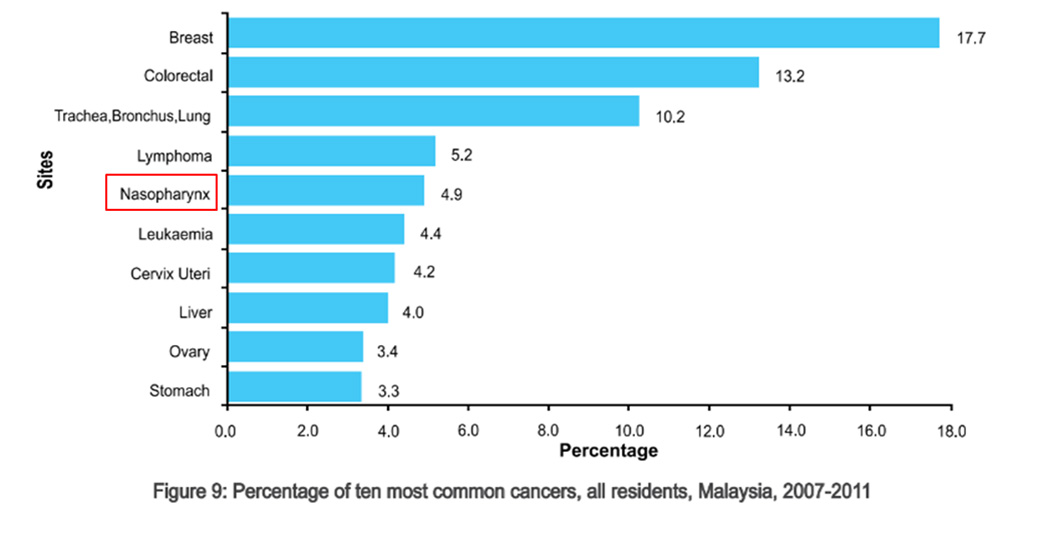 In the National Strategic Plan for Cancer Control Programme (NSPCCP) 2016-2020, NPC is one of the cancer types that the Ministry of Health focuses on to address cancer care and management from a holistic viewpoint that spans primary prevention, screening, early detection, diagnosis, treatment, rehabilitation and palliative care as well as traditional and complementary medicine (T&CM) and research. In particular, there is an aim to develop a NPC research programme to identify biomarkers and therapeutic targets, as well as to understand NPC biology.

Nasopharyngeal carcinoma (NPC) is a type of head and neck cancer which is also known as ‘Nose Cancer’. The tumour is located at the nasopharynx, the upper part of the throat behind the nose and the back of the nasal passages. The nasopharynx serves as a passageway for air traveling from the nose to the throat and then on to the lung.

Genetic background
Scientists have identified mutations of several genes increase the risk of developing NPC and some ethnicity-specific genes are associated with the disease susceptibility. Significantly, an individual might have 7-10% of increased risk of developing NPC if one of the parents has the disease.
Epstein-Barr virus (EBV) infection
Almost all NPC tumour cells contain a virus called EBV. EBV is the most common persistent virus infection in humans with around 95% of the world’s population sustaining an asymptomatic life-long infection without having any major heath complications. However, certain genetic defects enable EBV to establish stable infection at the nasopharyngeal epithelial cells that ultimately leads to the development of NPC.
Environment factors and lifestyle
Regular consumption of preserved food (such as salted fish), tobacco smoking and exposure to certain occupational hazards (such as wood dust, chemical in furniture and textile industry called formaldehyde) have been reported to increase the risk of NPC.
Symptoms

The main clinical challenge of NPC is late presentation. Approximately 80% cases are diagnosed at late stage (stage III and IV) due to overlooking of trivial symptoms at early stage. The survival rate of NPC patients can be >90% (see Diagnosis section) if treated early because NPC tumour is very sensitive to radiotherapy. Therefore, it is extremely important to be aware of the possible symptoms of NPC.

The early symptoms of NPC are trivial and similar to the common symptoms of cold so they may be easily missed. These symptoms include:


It is important to note that nasal block and ear block caused by cough and cold generally affect both sides while the obstruction caused by NPC is usually unilateral.

When NPC progresses, tumour can compress on cranial nerves and the symptoms are:


If NPC is not treated early, it could further progress and damage important structures in the neck and spread to the other organs, which would make it very difficult to treat. The common symptoms at late stage include:


In many cases (>75%), NPC patients only start seeking medical advice when there is a painless neck lump on one side of the neck. Often, this may be mistakenly related to thyroid disease (commonly known as goiter). It is important to note that neck swelling caused by goiter occurs at the middle of the neck, while lymph node swelling due to NPC is on the left or right side of the neck and close to the ear. 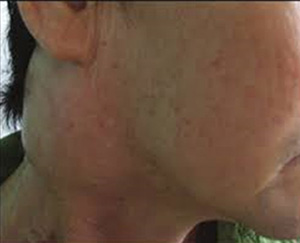 Neck swelling/lump caused by NPC usually occurs on one side of the neck, close to the ear. (Picture extracted from www.moh.gov.my)

Currently, there are no simple exams or blood tests that can detect this cancer early. If you have signs or symptoms that suggest you might have NPC, you need to see an ear, nose and throat (ENT) specialist. A physical exam will be done to look for signs of NPC and a more thorough exam of your nasopharynx will be done using a test called nasoendoscopy. Numbing medicine is sprayed into your nose and a thin flexible tube called a nasoendoscope will be put in through your nose to look directly at the lining of nasopharynx. If a suspicious growth is seen, a small piece of tissue (biopsy) will be taken out for examination. The biospy is then sent to a pathology lab, where a pathologist looks at it under a microscope to determine if cancer cells are present. Upon being confirmed to have NPC, the patient would need to undergo diagnostic imaging (e.g. X-ray, CT, MRI scans) to determine the extent of the disease whether it has spread to the distant regions or other organs.

Staging
Staging is a way of describing where the cancer is located, if or where it has spread, and whether it is affecting other parts of the body. The American Joint Committee on Cancer (AJCC) and the International Union for Cancer Control (UICC) use the tumour/node/metastasis (TNM) classification system to stage NPC (AJCC Cancer Staging Manual, 8th Edition, 2017, Springer International Publishing).

Survival rates
Survival rates provide an idea of what percentage of people with the same type and stage of cancer are still alive a certain amount of time after they were diagnosed. They can’t tell you how long you will live, but they may help give you a better understanding of how likely it is that your treatment will be successful.

The treatment option of NPC is based on the stage of the disease. Currently, the main treatment options for primary NPC (newly diagnosed NPC) are radiotherapy and chemotherapy that are given by an oncologist, while surgery is done by an ENT surgeon.

Radiotherapy
Radiotherapy uses high-energy x-rays or particles to kill the cancer cells and NPC cells are highly sensitive to radiation. Radiotherapy usually targets the primary NPC tumour as well as the nearby lymph nodes on the neck. Radiotherapy alone is usually given to NPC patients with early stage disease (e.g. stage I). There are two main types of radiotherapy:

Chemotherapy
Chemotherapy uses drugs to destroy cancer cells, usually by stopping the cancer cells’ ability to grow. Chemotherapy is often used in conjunction with radiotherapy to improve the overall treatment outcome of NPC patients with a stage II-IV disease. Chemotherapy is mostly given orally or through intravenous (IV) injection. Chemotherapy may be given in different situations to treat NPC:


Surgery
Surgery is normally not a modality of treatment for new cases of NPC since NPC is very radiosensitive. Surgery is reserved for recurrence in nasopharynx or neck lymph nodes.

Doctors and scientists always look for better ways to manage NPC. To make scientific advances, research studies are conducted to test new treatments involving volunteers, called clinical trials. There are currently a number of clinical trials on immunotherapy (a type of cancer treatment that boosts the body's immune system to fight cancer) for NPC and the patients should talk to their doctors about the pros and cons of joining a clinical trial.